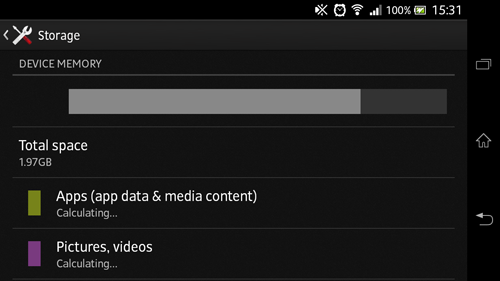 As far as the unrooted users are concerned, there are only a few options for moving the data to external SD card. There are apps like App2SD which can help you but they do not work on all the phones. So make sure you create a backup of all the app files before trying out any such thing. Also make sure your device is compatible with the app before using it. For backing up app data, you can use Helium app. Helium works fine for unrooted users.

If you have been using Whatsapp for too long and haven’t deleted messages in a while then delete as much messages as possible. Your laziness is costing you internal memory! Not just whatsapp messages, you can also remove the text messages and save some space. I personally saved 40MB once just by clearing out a lot of vague Whatsapp family group texts and ended up getting rid of the low internal memory warning for a few days.

Cache memory is really hard to clear manually so use apps like Cleanmaster for clearing the cache memory and deleting junk files. If you are using it for the first time on your phone then you are surely going to save so much of space that you might have not even thought of!

There’s this LOST.DIR folder on your Android phone’s directory. LOST.DIR folder stores all the corrupted files when you transfer data from your phone to PC or to Mac. So clearing out this folder is also advisable.

This is perhaps the most obvious thing to do, even the low internal memory warning says “try deleting some apps”. You can delete all the unused apps on your phone and you’ll save a lot of internal memory. There are certain apps that are downloaded just out of curiosity but are never used, all of us have such apps on our phones so try deleting some of those.

Well this is all we could sum up for getting rid of the low internal memory warning. If you have any suggestions or any tips for fellow readers please drop them down on the comments section.