Intel has launched its 3rd Generation Core processors (Ivy Bridge), based on 22nm 3-D tri-gate fabrication technology. It’s for the first time that Intel has launched both a new processor and a new architecture in a single iteration.

Intel will launch more of the 3rd Generation Intel Core processors later this year,for servers and intelligent retail systems, Ultrabooks and laptops, as well as for healthcare and other industries. 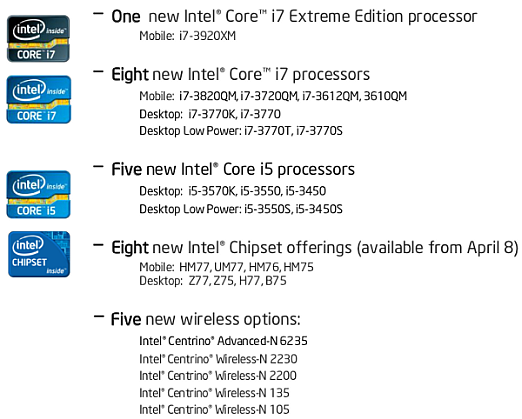 3rd Gen Intel Core processors are based on the Intel’s new 22nm Architecture and 3-d Trigate transistor technology, thus providing it with extra dense three-dimensional circuit. What it means is that these new line of processors will be able to provide enhanced 3D and HD multimedia playback along with low power consumption,thanks to a much improved power consumption with the tri-gate design’s negligible leakage, and the more efficient 22nm process. TDPs fall as low as 77W with standard power models. Initially these are quad-core processors for high-end desktops, laptops and all-in-ones.Dual-core Core i3 offerings, as well as ultra-low voltage and power offerings, will be available to the market from June onwards.

Graphic performance is also improved by the presence of the new Intel HD Graphics 4000 as the on-die GPU replacing Sandy Bridge’s HD 3000, with built-in support for DirectX11, OpenGL 3.1 and OpenGL 1.1, GPU-specific on-die L3 cache on the High-end processors.Low-end 3rd Gen processors will have Intel HD 2500 GPU on-die. To improve the video playback and decoding ,Intel Quick Sync Video 2.0 technology is present which promises a boost of speed up to 23 times compared to a PC just 3 years old.

Improved data transfer speed is due to USB3.0 built-in to the Series 7 Platform Controller Hub, and PCIe 3.0 integrated with the processor. Intel is also offering Intel Identity Protection Technology (IPT) and Intel Anti-Theft technology,and new Intel Secure Key and Intel OS Guard, which will generate truly random numbers to strengthen encryption algorithms, and defends against privilege escalation attacks. These can also make a portion of the screen unreadable to spyware with the “protected transaction display” feature.

In a Nut Shell

What is the release date for Ivy Bridge

As for the news initial offering of quad-core series is already running in the market from April 29.Dual-core Core i3 offerings, as well as ultra-low voltage and power offerings, will be available to the market from June onwards. 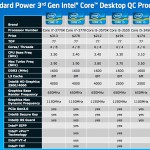 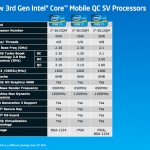 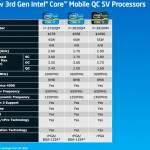 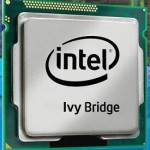 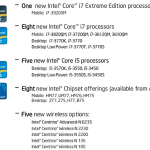