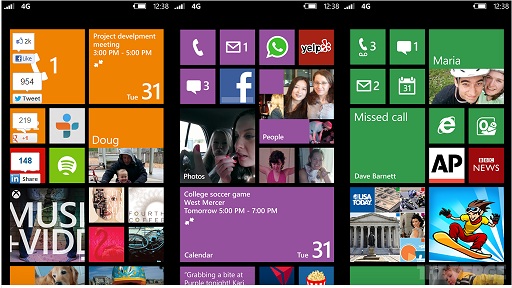 Looks like Microsoft is on a roll,while the heat of Surface tablets is still in the air the Redmond giant announced the much awaited upgrade to its mobile platform,Windows Phone 8.

Windows Phone 7.5 despite of having strenghts like the fluid UI,flawless and lag free experience had usability and compatibility issues like lack of Micro SD support,Low Screen Resolution,Proper Multitasking and lack of customization which have been greatly addressed in the Windows Phone 8.Lets have a sneak peak of the new features of Windows Phone 8 :

1) New Architecture : Windows Phone is a totally new build from ground up,the new kernel is very similar to the desktop windows 8 and is built on the same NTFS file system,same networking,security and graphics (directX) engine as of its bigger brother.Zednet calls it the real Windows core.

3)Expandable Memory : Though you might have found support of MicroSD card in some of the legacy windows phones (eg : Samsung Focus) in the core Windows Phone 7.5 never supported one,it was the hardwork of the device manfucturer that made the compatibility possible,however no more that would be an issue as Windows Phone 8 now supports MicroSD card.

5) NFC : Near Field Communication(NFC) is a connectivity technology that lets you share data with other NFC enabled devices by putting them in contact and all Windows Phone 8 devices would feature NFC.

6)Wallet : Now you can carry  your credit cards,debit cards,coupons,boarding passes etc on your digital wallet use them through NFC or secure SIM in the near future.

7)IE 10 : The most advanced IE that is to be found in Windows 8 will be integral feature of Windows Phone 8 as well.The IE 10 features anti phishing,and SmartScreen filtering that blocks malware and potentially dangerous websites.

8)Nokia Maps : Windows Phone 8 will be sporting turn by turn navigation powered by Nokia,you can also download and store the maps and access them offline which would be quite handy at times of bad connectivity and also saves excess drain of battery life due to internet usage.

9)New Start Screen : Windows Phone 8 now features a more customizable start screen where you can change the background colors and adjust the tiles into three different  sizes (tiny, medium and large) as per your priority ease of access and likability.

So these were some of the new windows phone 8 features and in the core there would be more minor tweaks and adjustments made to the OS to compete with the old players-Android and iOS.