So after countless speculations,leaks and rumors the Samsung’s flagship model also the most successful Android mobile,Samsung Galaxy S3 is here.First of  lets dive straight into its specifications. 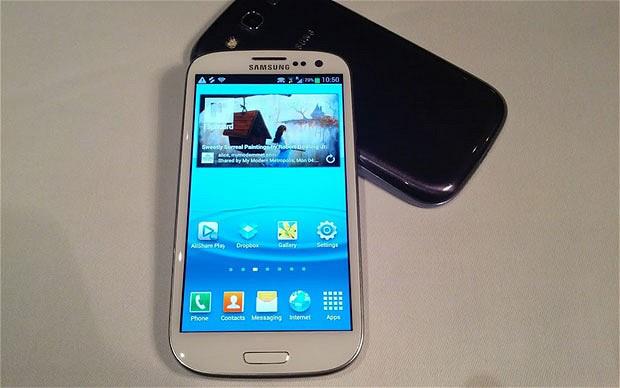 That was the hardware part,on the software end, Samsung has introduced some interesting features like SmartStay,S voice and lots of photo sharing features in the camera app. Smarstay keeps phone’s display from timing out as long as you are viewing it,this is done by the front facing camera acting as a sensor.SVoice is just another siri kind of app which does a few basic tasks like waking up the phone, requesting songs, capturing photos and inquiring about the weather,however it looks like it does it better than any other aftermarket app.

As one could have expected,the Galaxy S3 packs in quite a lot of punch in it.With the all new Quad Core Exynos Processor this device could possibly do a lot more than a traditional smart phone.Brilliant HD display with 4.8″ superamoled screen is the best on any smartphone till date.

Also the addition of a variety of new sensors such as Barometer,Gyroscope,Digital compass makes the S3 more than just a smart phone,it’s a digital  tool kit.And the much complained battery life is answered with a whooping 2100 mah Li-ion battery,however it is yet to be seen how the quad-core processor drains it out.

On the downsides,the phone is heavier and bulkier when compared to both the previous generation s2 .The Samsung Galaxy S3 weighs 133 gms while the S2 was only 116 gms.

We have an all new Exynos processor which clearly is twice or even faster than the current dual core processor in the Galaxy S2. But how far this processor can be put to use is a different question.Also the display is increased to 4.8″ from 4.3″ in s2 but the Samsung galaxy s2 had super Amoled Plus display tech while the s3 uses the previous generation Super Amoled.

We have a set of all new sensors like Barometer and Gyroscope,digital compass etc fitted into the S3. Samsung galaxy s3 has an improved camera with AF and HDR however it has the same optics used in the previous generation camera but comes in with new photo sharing features.The S3 is heavier,133 gms vs 116 gms (s2) but is of almost same thickness s2 (8.6mm) and s3 is 8.6 mm.

Also we have an increased capacity of battery,the S3 is powered by a 2100 mAh battery.And some new software features like NFC,Smart Say,S voice and photo sharing features and of course the S3 comes ICS ready are the add ons you would find on the S3.

So,would you be willing to upgrade from your S2 to S3 for these features ?