Here’s a list of the 5 best HD games you can have on your iPad. All the below games are a fine blend of good graphics and an amazing gameplay. So no matter who you are or what you do, if you have an iPad you will really enjoy playing all these games! 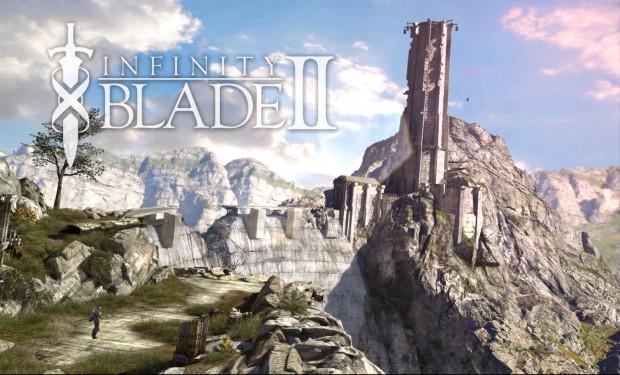 This action packed game is totally worth the dough you have to shell out to get it. It may seem a little expensive at first but it sure gives you all your money’s worth. The beautiful HD graphics, the simple controls, and the complex gameplay are all contributing factors to this game’s success. As you might have realized, this game is a sequel to Infinity Blade which was released back in 2010. For a fuller experience of the game I suggest you play the first part before moving on to the second. However, if casual is your style you can just jump right into the shoes of Siris (the main protagonist) and beat the crap out of your enemies with your Infinity Blade sword. The gameplay is also something definitely worth mentioning. Apart from its straight up hack-and-slash combat that leaves your enemies in pieces, the game also features certain RPG elements like character customizations and skill points (gems) to increase your effectiveness in battle. You can choose from three different weapon combinations and also an array of magic spells to assist your fight against evil. Whether you are an avid gamer or just a casual one, this game is a one-time investment (what with its replay value) that will keep you entertained for several weeks! 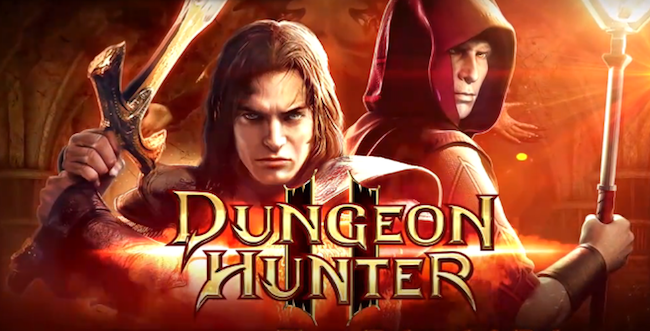 This game is similar in many ways to Infinity Blade II. So if you’re done with Infinity Blade and love it and just can’t get enough the type of gameplay it offers, you might as well get Dungeon Hunter. This game is a kind-of post-Diablo hack-n’-slash role-playing game. Pretty much the same words I used to describe the previous game. The story of Dungeon Hunter 2, however, isn’t as gripping as Infinity Blade but it more than makes up for it with its deep customization system. You can choose to be one among three character classes, each with two specializations, and a number of skill upgrades to improve the various aspects of your character. The game also features a looting system with hundreds of unique items to collect including melee and ranged weapons. The graphics have been improved since the last game, and the controls fine-tuned. Also, Dungeon Hunter can be played in 3 different difficulty modes with a story that extends over an open-world that is pretty huge considering it is, after all, a handheld game! So basically, if you’re a fan of RPGs or simply enjoyed playing Infinity Blade, this game is definitely a must have. 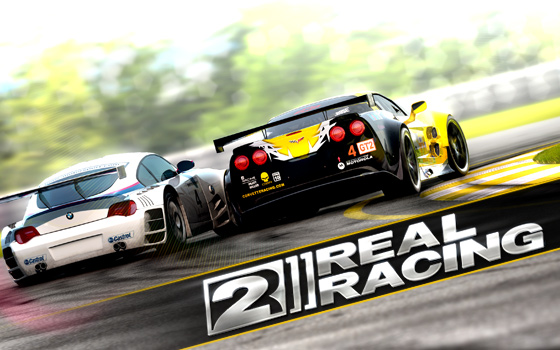 Just what the name says, Real Racing. In Real Racing the developers have tried to capture the physics of racing in the most simulating way possible without making it too hard for you to progress. Which means no longer will one teensy little mistake cause you to lose the entire race! But that’s not the only reason Real Racing is on this list (obviously). As a racing game, Real Racing has taken mobile gaming to another level in terms of both graphics and gameplay. The cars looks very realistic, in the sense, you can perfectly recognize their real-life counterparts. The environment and tracks are also beautifully rendered. Real Racing 2 looks and performs a lot better on the iPad 2 (because of the superior hardware) than the iPhone, but there isn’t much of a problem on the iPhone except for the occasional lag. The actual problem is when this lag creeps in. If it’s on a straight well and good, you’ll be fine, but if it’s on a hairpin or sharp turn or in the middle of a spectacular drift… you know what lag does! The controls are also pretty accurate, though if you are accustomed to playing other Racing games like Need for Speed and Asphalt, they might take a while to get used to. The game features a number of customizable cars (from the real world) and some fun and treacherous tracks to burn rubber on. Real Racing takes a step away from a pure simulator towards a fun, arcade-style racing game giving it the perfect balance of fun and skill! If you’re a fan of racing, get this game. You can’t go wrong with Real Racing 2. 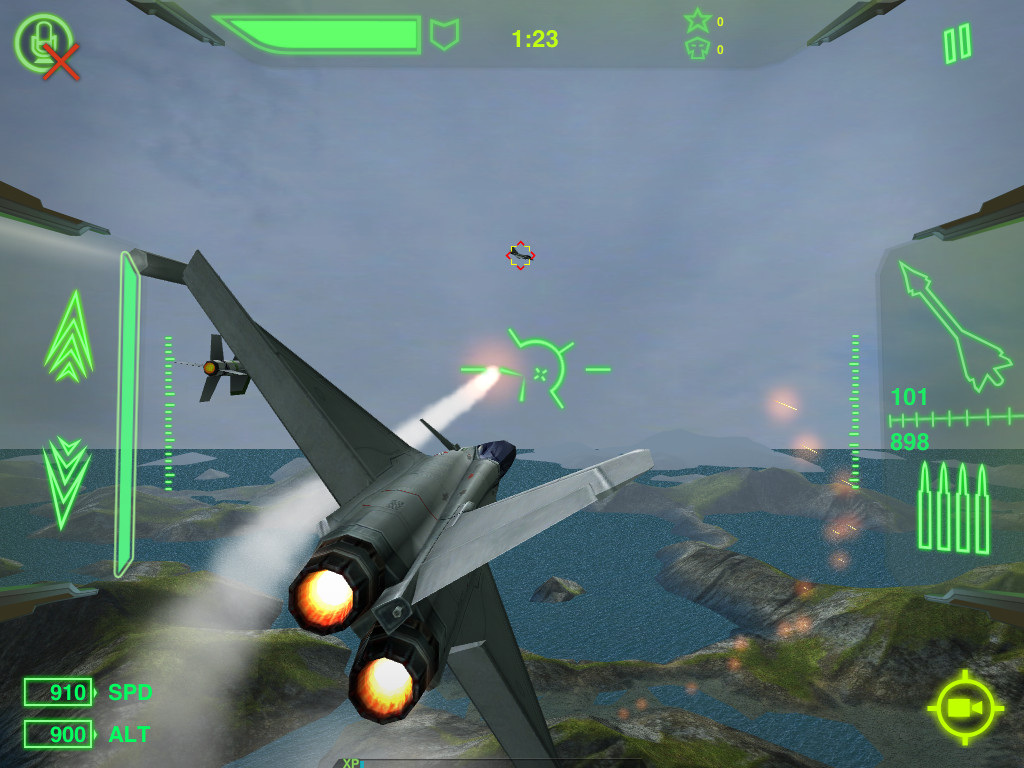 Moving from cars to fighter jets, but staying within the conundrums of simulators, we bring you the best in combat flight simulation you can get for your Apple device. MetalStorm is exactly what it says, it’s a storm of metal flying in sky blowing things up into the tiniest bits that will rain down on an unsuspecting (or suspecting) world. However, the game is actually less dramatic that how I put it… but still a lot of fun! The graphics are great, and use iPhone 4’s retina display well; although, even without it the game looks incredible. The controls are simple and crisp and use the gyroscope, giving you that joystick feel you’ve always wanted in a flight simulator. There are a number of different modes to play, with several different jets and a lot of customization to keep you occupied for hours! The only negative thing about this game is that although the game is free as is, you have to pay to unlock the best features of the game. That is usually a turn-off for most people, me included. I’d rather they charge an amount for the game and keep the in-game content free. But that said the game is a brilliant play, and if you are a flying enthusiast or simply a connoisseur of planes and everything 10000 feet above the ground (cumulonimbus, anyone?), this game is something you should have. However, you can also get it if you simply enjoy blowing thing up. 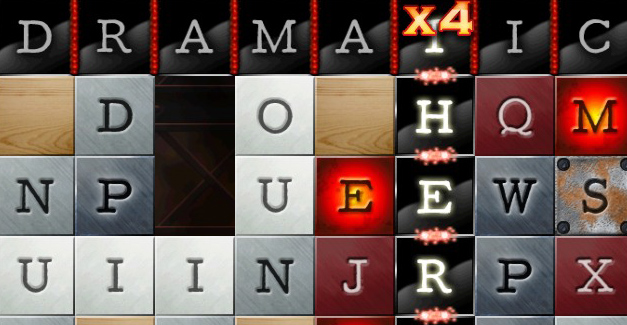 WELDER is for those who like playing the more intellectual games. This one in particular is for those who have a penchant for vocabulary (if you didn’t understand penchant, I strongly recommend you get this game to improve yours). If you think you don’t enjoy vocabulary, this game will beg to differ. In fact, this game will change the way you look at vocabulary! How, you ask? It makes vocabulary a game! Literally. WELDER is word-nerd entertainment in all its glory. The game features tiles with letters on them that must be rearranged on a grid (by swapping horizontally, vertically and diagonally) into words of at least 4 letters in length.  You start with a certain number of swaps and gain more as you progress through the game. The gameplay is rather variable. This means the goals for each level change and so does the way to achieve them, thus making the game all the more fun, more challenging and less repetitive. The main thing that separates WELDER from other word building games is that this game doesn’t demand for speedy reactions, rather, it demands a clear thought process and execution strategy. WELDER is a new experience to those people who are accustomed to the usual word-creation games, but a good one! Also, make sure you read all the tips that the game dishes out occasionally through the course of the game. If you don’t you might miss out on something really vital to solving the next puzzle. So if words are your thing, and you enjoy word-games, this game is something you should get. On another note, if words aren’t your thing, but you really want to improve your vocabulary in the English language, this game can help you go a long way!