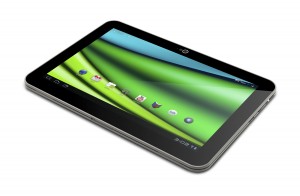 Toshiba has launched its new super thin Excite X10 tablet at the CES 2012 recently. The Company aims at grabbing the market share of the multiple android tablets by  making an eye-catching design and putting it at an attractive price tag.We will now take a detailed look on the specifications and see how it stood up with other tablets .

Toshiba Excite X10 has a 10.1 inch screen and supports a maximum resolution of 1280*800 pixels .It comes covered by the hard and tough Gorilla Glass and comes with smooth magnesium alloy backside .The display is quite decent and vivid giving the highest pixel detail .

Toshiba focussed very much on the design aspects and makes it as the lightest tablet till date. The Toshiba Excite X10 is about 0.4 pounds lighter than its rival Samsung Galaxy tab 10.1 and almost 66 grams lighter than the Apple iPad 2.It weighs just around 1.2 pounds and you can  hardly feel it. It is about 7.7 mm thick edging out Asus Transformer Prime by 0.6mm.In short it is thinner and lighter than most of the tablets out there . 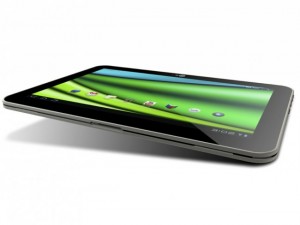 Toshiba Excite X10 comes with the Android 4.0 aka Ice cream sandwich Operating system which is expected to unify the OS in mobiles and tablets and more refined offering innovative features.

Toshiba Excite X10 is powered by a 1.2 GHz OMAP 4430 dual-core processor and a 1 GB of RAM.Both the processor and RAM are quite decent offering fast app-switching and smooth transitions.

Toshiba Excite X10 comes in two versions with storage space of 16 GB and 32 GB.Battery life is expected to be about 8 hours which is very good for a tablet.

Toshiba packs a LED backlight supported 5 Megapixel rear facing camera and a 2 Megapixel front facing camera suitable for video calling.Toshiba is not giving up anything and supported HDMI,Micro-USB and Micro SD slots .Considering how thin it is , it’s not at all an easy task to design offering these ports. It supports Bluetooth 2.1+EDR and Wi-Fi 802.11(b/g/n)

Though Toshiba Excite X10 is very decent in specifications and is coming with Android 4.0 OS , we feel it is bit overpriced considering the amount of tablets releasing every day with similar specs and at lesser price. Of course Toshiba can boast about its thin and sleek design which is very pleasing to eyes but we have to just wait and see how much the design factor will grab the tablet market.